After School Gets Parental Approval 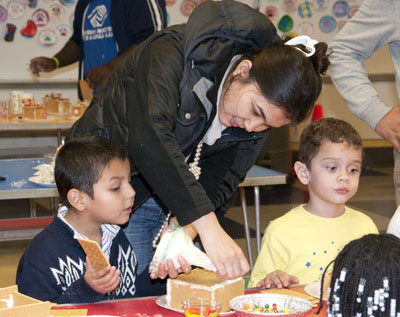 Parents of After School for All Partnership (ASAP) students believe the activities their children receive are having a positive impact.

This past December, 702 parents completed surveys that asked a variety of questions about their ASAP experiences and impressions.

In the survey, 86.1% of parents said the after school programs help produce better school day learning and behavior for their child.

86.5% of parents who have children in ASAP believed the learning their child receives in the after school program has a direct correlation/link to the curriculum taught in the regular school day.

Additionally, 75% said they believe their child's grades have improved since participating in after school.

ASAP is a community effort to expand access to, and increase the quality of, after school programs for the Greater St. Louis Region. ASAP is managed by ARCHS, St. Louis for Kids and the Saint Louis Public School District and is funded by a unique network of public and private funders such as the State of Missouri, the St. Louis Mental Health Board and others

ASAP Hoopin' It Up with Basketball League

Thanks to a partnership with the St. Louis Rams, ASAP after school progams in St. Louis Public Schools are getting the opportunity to show off how they ball in a competitive and fun environment.

Student basketball players and cheerleaders who earn acceptable grades also are given school uniforms, which are provided by the Rams. The teams are coached by after school site directors who teach fundamentals of the game as well as teamwork, dedication, and hard work. More so, all student-athletes who make the grade in the classroom get the opportunity to play or cheer!

The league ends in early March, but there is still plenty of competitive games left between the after school programs.

Stay tuned for more photo galleries of this exciting league!

ASAP, its providers, and staff wish everyone a happy and safe Holiday season! During this fun season, several ASAP programs have been putting special Holiday programs on for their students. Click any of the links below to see some photos from the events!

James A.R. Nelson, a 12-year-old 5th grader at Hanrahan Elementary, has aspired to play the snare ever since he first heard the sounds of drums in his church choir.

“When I was little I liked the sound of the church drums,” he said. “I have wanted to play ever since.”

Since 2008, the ASAP after school program at Hanrahan Elementary School (operated by Provident, Inc.) has given the opportunity for their students to be involved in an afterschool drumline program. The drummers range from nine to 13 years old, all from the Jennings School District. Together since this past January, the drummers “really look forward to drumline practice and have really worked hard this year,” said Nicholas McDowell, Drum Instructor and Site Director at Hanrahan Elementary.

The program has worked with over 150 students from Hanrahan Elementary and Gary Gore Elementary “teaching them respect, leadership, camaraderie, and the basics of musicianship,” according to McDowell. Currently, there are 12 students, among them eight new faces this year

"Memorandum of Agreement" Signed to Outline Management Duties of ASAP

On October 12, 2011 a new "memorandum of agreement" was signed by Area Resources for Community and Human Services (ARCHS), St. Louis for Kids, and St. Louis Public Schools that outlines the management duties for the After School for All Partnership (ASAP).

ASAP's 42 programs are hosting a variety of fun and educational activities to showcase the importance of after school throughout the year. Watch for updates and pictures.