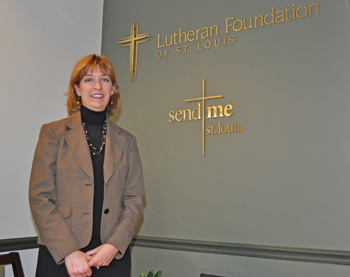 Perhaps Lutheran Foundation of St. Louis’ commitment to helping the ex-offender population can best be summed up by the Hebrews Scripture it displays on its web site: “Remember those in prison as if you were their fellow prisoners, and those who are mistreated as if you yourselves were suffering.”

Or, maybe it is the Foundation’s beliefs combined with a $12,000 grant it awarded to ARCHS to help support the recently expanded St. Louis Alliance for Reentry (STAR). The grant provides strategic management support to STAR as it connects reentry individuals to agencies working in coordination to strengthen the delivery of ex-offender services.

“We are interested in the church being brought into the lives of hurting people, and we include prisoners in those who are hurting,” said Ann Vasquez, President and Chief Executive Officer. “In general, the faith community has historically and still continues to be that welcoming and second chance support foundation to say we still love and care about you.”

Vasquez said Lutheran Foundation of St. Louis developed a strategic plan for the next several years, and in that plan decided to use funds towards reentry causes because it is not an area that many organizations want to become involved in.

“It seemed like a good mission fit for us. We didn’t say we want recidivism brought down a certain amount, but we work with the organizations who work with the people to ultimately lower recidivism,” Vasquez said.

As it looked to award groups who can most benefit ex-offenders and the community, the Foundation believed STAR’s efforts could reduce recidivism, and wanted to assist with the process.

“We like to see organizations work collaboratively,” Vasquez said. “ARCHS is an important partner in this process because ARCHS is working collaboratively with all of the other partners, and the Lutheran Foundation of St. Louis likes to fund things when work is done together.”

In addition to reentry, the Foundation is active in Lutheran education, congregation outreach, Christian volunteerism and children’s mental health. The Foundation  has also partnered with ARCHS to provide funding for ASAP.