Humanitri In It for the Long Haul 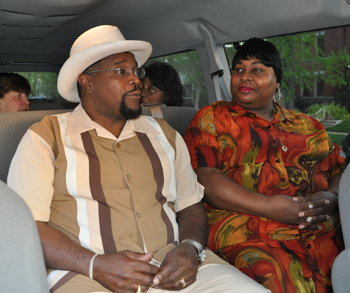 The city of St. Louis was still asleep as the sun broke the horizon of a muggy and early April 10 morning. Not a vehicle or person was in sight down Russell Boulevard, except for a Humanitri bus waiting to depart to a state prison. The passengers eagerly waiting inside did not care that it was 6:15 in the morning, or that they had to start their weekend earlier than most. They were happy to be on their way to see their family members who are in prison.

“I have two sons locked up. I am the only one who ever goes to see them,” said one woman, as she excitedly tapped her foot in anticipation. “One comes out next year, and the other comes out in less than two. I let them know I love them, and I am starting to see positive changes because one just got his G.E.D. and wants to go to school when he gets out.”

Humanitri’s new two-year pilot program, “Next Steps Home,” will continue to serve inmates and their families 12 to 18 months after release.

Studies show that former inmates who successfully reintegrate into society for at least three years have significantly reduced rates of returning to prison. Inmates with regular visitation with loved ones while incarcerated also show reduced recidivism rates.

“It keeps the families connected and the chances they return to prison down. Those in prison are broken down, and their families are the only lifeline that they have,” said Marcia West, Humanitri transportation coordinator. “To have a loved one in their lives is important, so it is important we get them there to make sure they stay motivated for what they have on the outside.”

ARCHS’ role provides offenders with pre-release mentoring activities and family reunification support services, including transportation to the state prisons in Vandalia and Pacific via Humanitri. ARCHS was recently awarded $265,944 from the U.S. Department of Justice via Second Chance Act funding for a new mentoring program in conjunction with the Missouri Deparatment of Corrections. ARCHS is one of the first organizations in America to receive Second Chance Act funds, and the only organization in Missouri to do so.

Humanitri is able to focus its valuable time and energy on improving the lives of area residents, by letting ARCHS’ Leveraged Resources Management (LRM) handle the financial side of its business.

“Our partnership with LRM brings Humanitri more financial expertise than we’ve ever had in-house, and at a fraction of the cost,” said Robert Otrembiak, Executive Director of Humanitri.