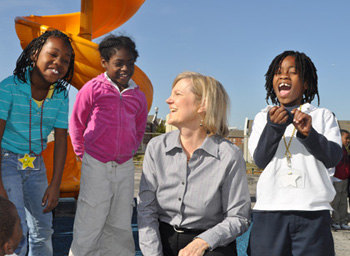 Few organizations in the area can attest to how quality education-based environments can contribute to a child’s development as can the St. Louis Mental Health Board (MHB). Since 2006, MHB has seen the value of well-structured after school programs, and the positive results they can achieve.

There is a reason for MHB’s significant investment, $700,000 to be exact, in public after school programs, even though needs are great in other areas as well.

“Prior to the passage of Proposition K in November of 2004, we funded treatment programming through our Mental Health Fund,” said Don Cuvo, MHB’s Executive Director. “On the treatment side, we were able to see the results when after school services were not offered. When funding became available through the Community Children’s Services Fund, we were able to also direct funds toward areas of prevention.”

“The study definitely showed the need for after school programs was not being met” according to Jan Ashbrook, MHB Project Director.

MHB began investing in quality after school programs in 2006 through a three-year partnership with St. Louis Public Schools. Their goal was to provide 10 after school programs that were licensed, comprehensive and high quality to children in grades K-6 that previously did not have access to such programs.

Significant progress was made during those first three years, Cuvo said, and it was then timely for MHB to move the financial management of its public after school investment formally under the ASAP umbrella, with ARCHS as the fiscal agent. MHB’s motivation was to show support for ASAP and become a major partner in the region's efforts to expand after school efforts in public schools. In August 2009, ARCHS began managing MHB’s funded after school locations. This includes $700,000 in MHB funding and $100,000 from the St. Louis Public Schools. The move strengthened ARCHS’ position as one of the largest providers of free after school services in the state of Missouri.

“By contracting with ARCHS for the financial management, we are assured our investment is being properly handled,” Cuvo said.

Since its formation in 2007, ASAP and its partners (ARCHS, St. Louis for Kids and others) have dramatically increased access to after school services in the city of St. Louis. More than 4,000 students are served each day through ASAP and its partners. If parents had to pay out of pocket for the free after school services ASAP provides - the bill would exceed $12 million.